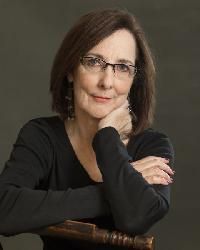 I believe that every Alabamian has the right to know the literary greats of our state – not just the internationally known ones like Harper Lee, Sonia Sanchez, and Winston Groom, but all the talented and hardworking writers who have spent their lives writing stories, poems, and plays that tell the story of this state. I also believe that young people of all ages deserve the right to be the best writers they can be, through study and practice. I have taught creative writing since I was a graduate student myself, and my greatest joy to this day is watching a young person stand before a crowd of her peers and read a poem for the first time. It has been my distinct honor to serve as AWF’s founding executive director since 1993, and I invite you to join me in this mission! Please become a member of AWF today. Join or renew here: www.writersforum.org

Jeanie Thompson has published five collections of poetry, The Myth of Water, Poems from the Life of Helen Keller (The University of Alabama Press, 2016), The Seasons Bear Us (River City Publishing, 2009), White for Harvest: New and Selected Poems (River City Publishing, 2001), Witness (Black Belt Press, 1995), and How to Enter the River (Holy Cow! Press, 1985), and three chapbooks. She co-edited The Remembered Gate: Memoirs by Alabama Writers, (University of Alabama Press, 2002) with Jay Lamar. Witness won a Benjamin Franklin Award from the Publishers Marketing Association in 1996. Her poems, interviews with writers, and critical articles have appeared in Antaeus, Crazyhorse, Ironwood, North American Review, New England Review, PoemMemoirStory (Nelle), Southern Review, The Louisville Review, and numerous anthologies. Jeanie holds the MFA from The University of Alabama, where she was founding editor of the literary journal Black Warrior Review. She also received her BA in English at UA. She has taught at the University of New Orleans, the New Orleans Center for the Creative Arts, and the poetry-in-the-schools program in New Orleans and in Alabama. Jeanie has received Individual Artist fellowships from the Louisiana State Arts Council and the Alabama State Council on the Arts and was a Walter Dakin Fellow at the Sewanee Writers Conference 2000. She teaches as an adjunct poetry faculty member in the Spalding University low-residency MFA Writing Program. (photo by Jerry Siegel ©)